Video of Todd Coffey sprinting in a tuxedo 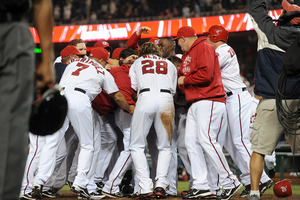 Nats' closer, and '09 1st Round pick, Drew Storen did a mock campaign video recently in which he implored "voters" to select the Washington Nationals as "America's Team" a designation once part of an Atlanta Braves/TBS marketing campaign that has also in the past been attached to teams like the NFL's Dallas Cowboys, who had a following that far exceeded the boundaries of the city and state in which each team played their games. "The Nationals play only minutes from American icons like the White House, Congress and Taco Bell," Storen said in the video, and the team has a party platform anyone could get behind, "We're pro baseball, pro family and pro goofy guys dressed up like Old Presidents. We can't promise lower taxes or a sound foreign policy, but we can promise a good time at the ballpark with good old-fashioned American baseball."

Good old-fashioned American baseball, as D.C. GM Mike Rizzo envisioned it at least, involved transforming the Nats from the league's worst defensive team in 2010 into a team full of fast, athletic, plus-defenders who could support a pitching staff Rizzo described recently in a Sirius/XM interview as, "...a pitch-to-contact staff, they're not afraid, they don't nibble, they're not walking guys, and thus our starting pitching has been better than anybody expected it to be outside of our organization." There no missing the sense of pride at the end of that sentence, and the defense the Nationals have played, stringing together a stretch of 130+ innings without an error recently and significantly cutting down on the total errors they've committed (before yesterday's 3-error loss), should be a source of pride for the Nats' architect too.

The Nationals are one of six (of 16) NL teams with a positive team UZR/150, +0.5, behind only the Giants, Rockies, Pirates, D-Backs and Reds. Their 37 errors (again three of them Sunday) are the third-lowest total in the NL, behind only the Dodgers and Phillies. The Nats' have the third-highest team FLD%, behind, again, the Dodgers and Phillies. Their fielding and their pitching have kept the Nationals in games, while their offense, until Ryan Zimmerman's return seemingly lit a fire under them last week, has been amongst the league's worst. 15 of 16 in team AVG (.236), 13 of 16 in OBP, 12th of 16 in SLG, 15 of 16 in BABIP, 12 of 16 in wRC+...

Though the Nationals must have counted on more offense than they've received, ("I don't know too many teams... when you lose your third and fifth hitter in your lineup," Rizzo said during the Sirius/XM interview mentioned above, that can overcome the loss of players like Zimmerman and Adam LaRoche), they've managed fairly well defensively without their Gold Glove-winning third baseman for most of the season and since Michael Morse replaced plus-defender Adam LaRoche at first. An improved defense has been the motivating factor behind most of the moves the general manager's made since taking over in early 2009.

"Baseball is about to see the equivalent of a laboratory study of the value of defense," the Washington Post's Thomas Boswell wrote in a January 2011 article exploring the Nats' GM's approach entitled, "Washington Nationals bet better defense will pad their win total in 2011." "Rizzo has expelled every defender except Ryan Zimmerman from the hideous bunch he inherited," Mr. Boswell explained. "If gifted glove men are as valuable as General Manager Mike Rizzo thinks, the Nats might be one of the game's surprise teams in '11."

The baseball world is starting to take notice. "The Nationals are the sleeping giant of the NL East," Fangraphs.com's Reed MacPhii wrote this morning in an article entitled, "The NL East and Realignment":

"Provided [Stephen] Strasburg comes back close to fully healthy next year, look for the Nationals to be above .500 next year. Then in 2013 with Harper and possibly Rendon in the big leagues, the Nationals could make a serious run at the postseason."

Strasburg caught the attention of the nation last year, not only in his stunning debut, but in every start he made at home and on the road before suffering a "significant tear" of the ulnar collateral ligament in his right elbow. It wasn't just the excessive coverage by the baseball media, however, Strasburg was bringing new fans onboard the Nationals bandwagon with every start he made. " I went up there," Strasburg told members of the D.C. press corps last September, "I stirred up the baseball world well enough that it had more people becoming Nats fans and I know they're going to be there when I come back in a year."

The Strasburg fans, at some point in the future are going to be outnumbered by the Bryce Harper-followers. The second of the Nats' back-to-back no.1 overall picks, and the second once-in-a-generation talent Washington drafted is tearing up the Class-A competition right now and might still be a year away, but long before he was even drafted and long before he'd started his pro career he was already one of the most talked and written about players in years. If Strasburg can works his way back, and Harper can meet expectations, the Nationals will have two star players that are capable of transcending NatsTown and becoming league-wide stars.

A future starting staff with Strasburg, Jordan Zimmermann, Sammy Solis ('10 2nd Round lefty), A.J. Cole, (a 4th round pick and 1st Round talent the Nats wowed with cash), Brad Meyers, Brad Peacock, Alex Meyer, Matt Purke (this year's Cole?), an infield with Ian Desmond, Danny Espinosa, Ryan Zimmerman and Anthony Rendon (if he signs), an outfield with Jayson Werth, Harper and the center fielder/leadoff man the Nats are hoping to develop but currently searching for...

"I don't know what the future is," Jayson Werth told SI.com's Mel Antonen in an article today entitled, "Nats exceeding expectations, but waiting for Werth to do his part", "but I compare it here to like it was when I got to Philadelphia in '07...Philadelphia wasn't the same place it is now. I think we have the ability to do that here.'"

"They've had double-digit hit totals in seven of their last 10 games," Mr. Antonen writes, and, "Until Sunday, when Tom Gorzelanny got hit hard in his first game back from the disabled list, Nationals starters had given up two runs or fewer in 14 of 18 games." The Nationals drew a over 107,000 fans (some of them O's fans admittedly) to Nationals Park this past weekend, and their eight-game win-streak pulled them within one game of .500 before Sunday's loss. Has it happened exactly as Werth, Mike Rizzo or the Lerner family planned it? Probably not, but however it's happened, it has, the Nationals are no longer a laughingstock. Are they America's team? Give it a year or two...

Inbox: What's Werth's worth to Washington?

Posted on June 20, 2011 by Bill Ladson
How much impact has Jayson Werth had on the Nationals this season? Beat reporter Bill Ladson tackles fans' questions in the latest Inbox.
Comments Off

Posted on June 20, 2011 by Bill Ladson
Nationals second baseman Danny Espinosa needs the fans' help to get voted into the 2011 All-Star Game, which will take place at Chase Field in July.
Comments Off

With the final guaranteed year on his contract almost halfway over, the Nationals have yet to approach Manager Jim Riggleman about his uncertain contract status, said Burton Rocks, Riggleman’s agent.

During spring training, Rocks said he hoped to reach an agreement on some kind of extension for Riggleman — either the team’s 2012 option or a multi-year deal — by Father’s Day. Even though Rocks has yet to discuss Riggleman’s status for next season with General Manager Mike Rizzo, he remained confident the Nationals will eventually decide to bring Riggleman back.